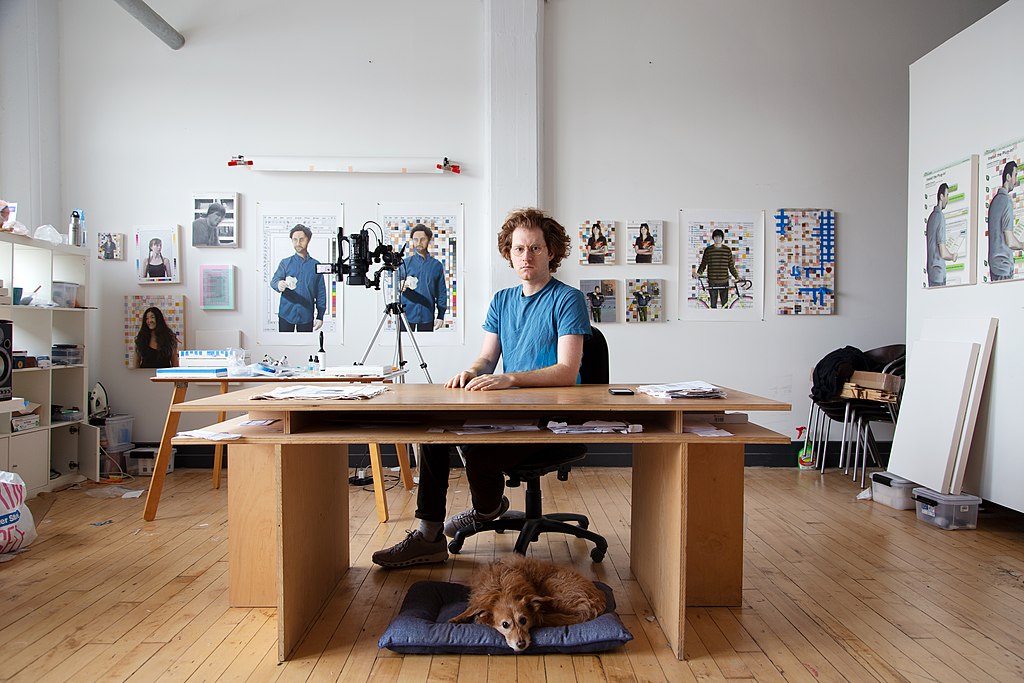 Michael Mandiberg (b. 1977, Detroit) is an interdisciplinary artist whose work manifests the poetics and politics of the information age. Mandiberg works within systems to make visible processes that are often hidden in plain sight, or on public web servers. While technically sophisticated, their projects exceed novelty to make propositions about how our lives are being shaped by these tools, and the ideologies undergirding them. This non-binary approach crosses media and evades stable categorization: from large-scale installations like Print Wikipedia’s 7,473 books, to custom software driven durational performance like Quantified Self Portrait, to socially engaged pedagogy like the New York Arts Practicum. They co-founded Art+Feminism, an international collaboration that takes place at The Museum of Modern Art, and hundreds of venues around the world.

Mandiberg received an MFA from California Institute of the Arts and a BA from Brown University. Their projects have been exhibited at the Whitney Museum of American Art, Los Angeles County Museum of Art, New Museum, Musée d’Art Moderne de la Ville de Paris, Arizona State University Museum and Library, Denny Dimin Gallery, Eyebeam, and Transmediale, amongst others, and are in the permanent collections of the Los Angeles County Museum of Art, Stedelijk Museum and 21c Museum. Their work has been written about widely, including in Artforum, Art in America, ARTnews, the New York Times, the New Yorker, and the Wall Street Journal.

Mandiberg is the recipient of a LACMA Art+Technology Lab grant, three Eyebeam fellowships, a Mellon fellowship at the CUNY Graduate Center, several Wikimedia Foundation grants, and commissions from Rhizome, and Turbulence. Mandiberg has participated in residencies at Fonderie Darling, the Banff Centre, Eyebeam, the MacDowell Colony, and 18th Street Arts Center.

Mandiberg is Professor of Media Culture at the College of Staten Island/CUNY and Doctoral Faculty at the CUNY Graduate Center. Mandiberg's work lives at Mandiberg.com.

A note on pronouns: please use them/them or refer to Michael by name rather than by gendered pronouns.